Sorry for my absence of countdown stuff these last couple days AND the lateness of this post. My family and I spent our Family Day down at Frank Slide walking around and learning more about the tragic event in 1903 in the small town of Frank, Alberta. It’s such a chilling thing to be there, walking around on basically a two mile wide graveyard of limestone. (I’m working on a project related to this so soon I will tell y’all more about it.) So, that is the reason why this post is so late, BUT it’s here now….Better late than never, right?

First things first, The Book Review of Forest of Whispers! 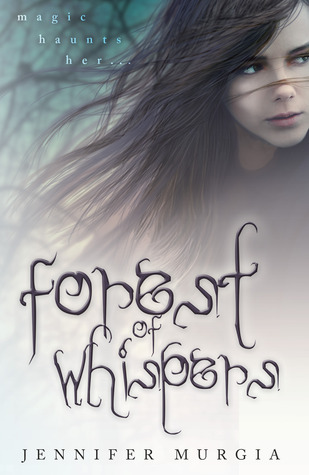 “This is who I am. I am no longer the simple girl hidden behind the safety of a make-believe forest. I am the story. I am the tall tale . . . I am the witch.”

Raised by an old fortune-teller within the dark veil of the Bavarian Black Forest, Rune has learned two valuable lessons: only take from the forest that which you can use, and never, never look anyone in the eye in the village. For something terrible happened in the forest long ago… and now, the whispers of a long-dead mother with a vengeful secret have come haunting.

Forced to flee all she has ever known, Rune soon learns of a legacy she is bound to–one that is drenched in fear, witchcraft and murder–a birthright that stretches beyond the grave to the trees where Rune is no longer safe.

This book….was absolutely FANTASTIC. Within seconds I was pulled into the story and doomed to never return until I reached the words ‘The End’

When I finished this book I sat around for a while trying to figure out what the heck to do with my life now that the book was over.

This book had me doodling away and SURPRISE fan art was made. I need to actually finish with it…but that is seriously how much I adored the book. 🙂

I was very brutally attacked by feels and many times I just wanted to reach into that book and give Rune and the other characters big hugs… Or just abduct them and put them away in a safe place where their author can’t hurt them and the characters would be happy and I would give them yummy hot chocolate and yes…I would keep them very safe. I just want my beautiful characters to be happy DX But really, despite the fact that this book did kill my feels I still say you pick up your own copy of this book as soon as you can and read it all right now….

Now! Characters! I LOVED the characters. First of all I am not going to lie and say that I kept picturing Matilde to look like the witch from Disney’s Brave…Though maybe not with such a big nose….Okay,anyways. moving on. I really liked Matilde as a character and I loved how she was like a mother to Rune and I just likes that whole relationship going on there. That was great. I loved Rune as a character as well. She was such a sweet character who was put through a lot of trials and had a heavy, and life threatening burden to carry…and really I think she handled everything pretty well…I mean if I were her I would have just curled up in a ball and cried until the ‘bad guys’ found me and POOF! bye bye me! So yeah, she was a great character who was a pretty tough cookie and I really enjoyed her very much.

The story is also from the POV of a young man named Laurentz and it was really great seeing his side of the story and just getting to know him as a character. I really enjoyed him as a character and his want to protect Rune and how he tries to help her is just-I just- ashjskshruhgjkshikgusyfgjysklfg.

It was just so cute how he set out to protect Rune and refused to see her like everyone else did and was set on her not being what people said and yes…I loved it! Quite adorable. I ship it! There is so much I hope happens in the second book too…. LIKE MY SHIP ACTUALLY SAILING for one thing! It’s a little stranded right now while I wait for ‘Castle of Sighs’ but, either way this book was absolutely wonderful and I adored it very very very much! 😀

My rating for this book is 5 Stars people….and in my mind, 5 Stars = Go buy this book right now, read it then LOVE IT.

QOTD: What is a genre/story you never tire of?
QOTD: What did you do for Valentines Day?
Hello lovelies! I got some new rep items recently so it's time for a rep post!
QOTD: What is a fandom you've been a part of for the longest time?