Today, I am here to bring you a review of an absolutely fantastic book by Eric Smith. And that book (as you can see in the title) is called ‘Inked’ 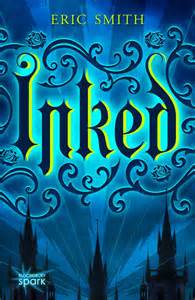 Tattoos once were an act of rebellion.

Now they decide your destiny the moment the magical Ink settles under your skin.

And in a world where Ink controls your fate, Caenum can’t escape soon enough. He is ready to run from his family, and his best friend Dreya, and the home he has known, just to have a chance at a choice.

But when he upsets the very Scribe scheduled to give him his Ink on his eighteenth birthday, he unwittingly sets in motion a series of events that sends the corrupt, magic-fearing government, The Citadel, after him and those he loves.

Now Caenum, Dreya, and their reluctant companion Kenzi must find their way to the Sanctuary, a secret town where those with the gift of magic are safe. Along the way, they learn the truth behind Ink, its dark origins, and why they are the only ones who can stop the Citadel.

Eric Smith takes you on a high-octane fantasy adventure, perfect for anyone who has dreamed of being different… only to discover that fate is more than skin deep.

This book was absolutely amazing! I loved it! (and am REALLLLLLLLLLLY hoping there is a book two one day.) The first couple chapters I was unsure about where this was going story wise but was really enjoying it but then after those first couple chapters (and the end of interruptions at that very moment when I was trying to read) I was suddenly pulled into this awesome, action packed adventure! and I loved it! I absolutely loved the setting too! It felt like I was standing there amidst everything. I was whisked away to another world for sure! As every chapter went on I fell more and more in love with the characters and the story. Even better some of the characters had super powers! Eep! *jumps up and down in excitement* I mean, it doesn’t get much better than that!…Though, there was one point in the story where I MIGHT have become jealous of this characters powers…I was basically sitting there reading and being like: Hello Character? Yes, yes you. Can you just give me your powers please?

If I had powers, man. It would be all sorts of awesomeness….

*cough cough* Anyways…back to what I was saying. This book was absolutely amazing and gave me all sorts of feels. Shipping feels, sadness feels…Feels all over the place! The characters were totally awesome and I loved them a lot!

Caenum was a really great character! (being the POV character that is good! :P) I liked his personality and his protective-ness of Dreya just about killed me every single time! It was just so sweet and adorable and- *shipping feels*

With that said, I really liked Dreya’s character as well. She was quite a sweet little thing but most definitely tough and could take care of herself without anyone’s assistance.

I am not going to lie though that Kenzi was my absolute favorite of the bunch though. A little stubborn at times and doesn’t seem to take orders all that well, Kenzi was an interesting addition to the little trio that consisted of himself, Caenum and Dreya. To be honest it seems like Kenzi always brought trouble with him wherever he went. (But that’s the fun of it, right?)…I don’t know if its just me but I found him to be a bit quirky too.

One thing I didn’t like (probably a minor thing in most peoples eyes and shouldn’t hinder you from reading the book! …That would be bad. Don’t not read the book cause of this little note!) was the language in the book. There wasn’t much of it but language in books just isn’t my favorite.  So yeah, just a quick little note there…..

Anyways! My rating for this awesome book is:

Well, Thats my review! Have you read the book? What are your thoughts on it? Is this book in your TBR pile? (IF so maybe bump it up to next read 😉 )

Hello Lovelies! . So I was scrolling through my camera roll on my phone and found this photo! Honestly if you had asked me I would have vet money on the fact that I posted this photo but alas… it is not so! (She has made lots of appearances in my stories tho!) . So what better time to show off my custom Lira mer from @undertheseacrochet ! . QOTD: Do you have a favorite mythological creature? . I definitely do! And yes I love Elves, Dragons, and Centaurs but when it comes down to it I LOVE mermaids/sirens so much! It's safe to say most my reads so far in 2020 have contained mermaids and I'm not even mad about it! . . #bookstagram #bookishcanadians #booknerd #booksharks #bibliophile #youngadult #bookworm #igreads #inkedbookworm #tattooedbookworm #bookstagramfeature #mybookfeatures #whimsicalfeatures #thelibrarianfiles #thelibrarianfilesreads #goodreads
Hello Laura! . . Its Adriana! I'm a 22 year old bartender, bookworm and writer from Alberta, Canada who you probably no could NOT stay away from this rep search because of how much I love both your shop and all this mer/sirens! . . So I'm not the best at these rep searches cause I don't like talking about myself (trust me, it makes things like job interviews or applying for any kind of thing that much more difficult 🤦🏼‍♀️) BUT ANYWAYS. I'm gonna give it a shot because, in the words of Alexander Hamilton, 'I am not throwing away my shot!' soooo let do this! 🙌 . . I feel that as a rep I can bring an energy and passion to your team through rep discussions and overall through my posts, unboxings and stories! I LOVE repping for companies as I love being able to share my love for my favorite shops and help them grow! Being a rep for your company would be such an amazing experience and it would be so great to work with you in this way! . . #undertheseacrochetrepsearch4
Hello Lovelies! . *kicks in door and charges in* IIM BACK! DID YOU MISS ME? . . I'm so sorry about the extended Christmas break I took… I never meant to be gone this long but life got crazy BUT I'm adjusting now and I have finally had the chance to take photos! . . QOTD: Are you doing a reading challenge this year? How's it going? What are you reading rn? Do you have a favorite read so far this year? . . Tell me all the things! I missed you all! . I'm currently on book 7 of my reading challenge (granted I've had 2 DNFs already 😭) but so far things are going great! I'm currently reading one of the Prequel Novels to the Witcher series and I'm loving it so far! . Love this booksleeve and want a sleeve of your very own? Head on over to @bellesbooksleeves shop to snag your very own sleeve and use my code FILES10 for a discount 💖 . . #bookstagram #bookishcanadians #booknerd #booksharks #bibliophile #youngadult #bookworm #igreads #inkedbookworm #tattooedbookworm #bookstagramfeature #mybookfeatures #whimsicalfeatures #thelibrarianfiles #thelibrarianfilesreads #goodreads
It's the last day of 2019! Isn't that insane?! . . QOTD: What are your New Year's Eve Plans? . My fiancé and I are going to a friend's house to hang out and I'm so excited! Then tomorrow we drive to go see family . . Love this Drinking Vessel? Want one of your own sent to you every month? Subscribe or Purchase a one time box and use the code LIBFILES5 for a discount! This code also works in @enchanted_fandoms_ Etsy shop and for regular boxes for TODAY ONLY. . . #bookstagram #bookishcanadians #booknerd #booksharks #bibliophile #youngadult #bookworm #igreads #inkedbookworm #tattooedbookworm #bookstagramfeature #mybookfeatures #whimsicalfeatures #thelibrarianfiles #thelibrarianfilesreads #goodreads