Apologies on my absence on the blog as of late. Life is CRAZY and I’m drowning in assignments these last few weeks haha. I may not get a writing post up Wednesday but I will try to get it up sometime this week 😀 But for now….It’s time for a release day celebration!

In this sequel to FOREST OF WHISPERS, Some secrets cannot be kept—in life or in death. Months have passed since Rune has heard a single whisper from her long-dead mother, the great witch of Bavaria. But the absence of one evil has only made room for another.
After rightfully inheriting her ancestral home, Pyrmont Castle, Rune settles into a quiet life taking care of two orphans left in the wake of the terrible witch hunt that claimed dozens of lives in the nearby village. As the days grow colder, the castle’s secrets beckon and Rune finds herself roaming where no one has set foot in a long time. In the bowels of the fortress is a locked room full of memories that hang like cobwebs—shelves stacked with jars, strange specimens, putrid liquids, and scrolls of spells. Rune is undeniably drawn to what she finds there, and she begins to dabble in the possibilities of magic, hoping to find a cure for the strangeness overwhelming the castle.
As secrets unspool, the delicate thread of Rune’s world is threatened when she realizes the key may lie in the dark forest she once called home and the boy she thought she knew

“FOREST OF WHISPERS drew me in from the very first page! Rune is a capable and empathetic heroine who had me rooting for her from the start. Fans of witch and rune-lore will enjoy this darkly woven tale.” ~Amalie Howard, author of critically acclaimed Waterfell, The Almost Girl, and Alpha Goddess, a Spring 2014 Kids’ INDIE NEXT title.

“NOT your average teenage witch! Jennifer Murgia’s FOREST OF WHISPERS is a dark, brooding mystery/thriller that captures the paranoid, plague-driven frenzy of 17th Century Europe with the speed and power of a galloping stallion. Rune, a 16-year old with formidable abilities that she herself can barely understand, must fight her own inner demons as well as what seems to be a whole world gone awry with bloodlust for her kind. This is a thrilling read.” ~ Molly Cochran, author of LEGACY & POISON

Jennifer Murgia writes moody fiction for teens—from paranormal fantasy (Angel Star, Lemniscate, The Bliss), to contemporary gut-punchers (Between These Lines). Her latest, Forest of Whispers, a 17th century historical mystery (about witches!) was a School Library Journal Fall 2014 HOT TITLE, and a 2014 Moonbeam Children’s Literature Award Winner. Look for the sequel,​Castle of Sighs, to hit shelves 9.15.15 from Spencer Hill Press. In 2012, Jennifer Co-Founded YA FEST with YA author/friend, Cyn Balog. She coordinates this unique annual festival, bringing teens and fellow Young Adult authors together at her hometown library in Easton, PA.

“I live in the in between. Between holding on and letting go. Hurt clings to me. Hope teases me. Home. I can’t explain it, but sometimes, I just want to go home.”

Talia and Jesse Vanderbilt have escaped a childhood full of abuse, and when they have a chance to put their father behind bars, setbacks arise from every direction. The siblings can’t help but consider the option to walk away and move on with their lives.

Then someone unexpected brings his own secrets, forcing the Vanderbilt teens to revisit their pasts and rethink their plans. Through it all, Lagan and Talia’s Post-it love story blossoms, while Jesse and Summer hit roadblocks.

From the award-winning author of Swimming Through Clouds and Seeing Through Stones comes a powerful story of freedom and belonging in this final book of the young adult trilogy that began with an invitation on a little Post-it note.

PRAISE FOR SOARING THROUGH STARS

“Soaring through Stars is a beautiful, perfect ending to a truly exceptional series… Don’t miss this one.”
~USA Today’s HEA Blog, Serena Chase

“Rajdeep Paulus writes young adult fiction with a new kind of hero… compassionate at moments when it would be much easier to stand by and do nothing.”
~Amazon Author Success Story

“The Swimming Through Clouds series is an incredible story of the strength of true love and the power of courage. Talia, Lagan, and Jesse will sneak into your heart and stay there long after you read the last line.” ~Amalie Howard, bestselling IndieNext author of Alpha Goddess 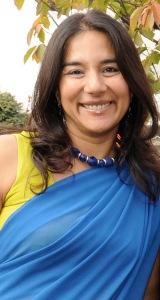 Rajdeep Paulus is an Award-winning author of SwimmingThrough Clouds and Seeing Through Stones. Rajdeep studied English Literature at Northwestern and lives in New York with her Sunshine and four princesses.

3 Winners win Ebooks of Swimming Through Clouds (Book One)